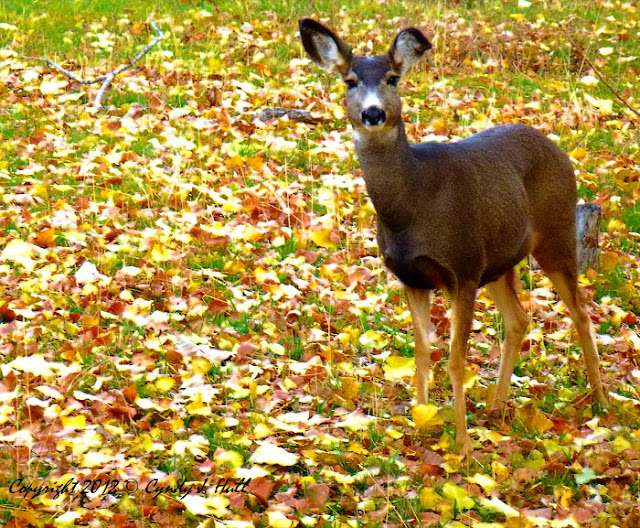 I love the amazing things you can see in Montana - without ever getting out of your car. Granted, mule deer are regarded as a nuisance by many, since they're excessively present, and can do a lot of damage to your car. But as long as they stay on their side of the ditch, they're beautiful. (Just look at those big, brown eyes!)
Posted by Cyndy at 19:06 1 comment: 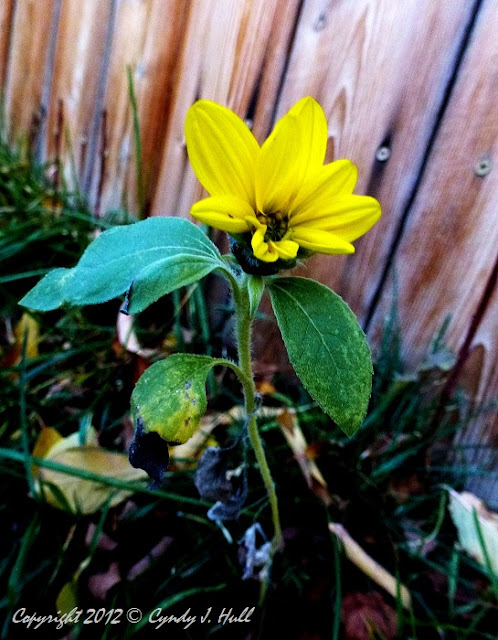 After most sunflowers have called it a day, this determined optimist ignored the signs of winter fast closing and chose to exist, albeit on a delayed time frame, or so some would say.  I'm guessing there were no worries of not bursting forth as the perfect sunflower. Simply being is sometimes plenty. And when in that space, it's good to find a level of joy, even contentment.
Posted by Cyndy at 13:52 No comments: 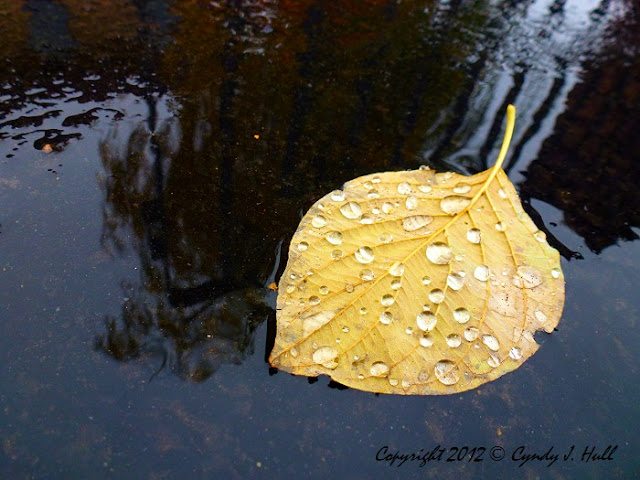 The clouds just can't decide today
whether to leave rain,
or snow to stay.

So they compromised with a gift of these lovely sparklings. I hurried to my car to retrieve my camera, hoping no one would run over my latest photo subject. Then I had to make sure no one would run over me, crouching out on the asphalt during lunchtime! This was my shortest photo shoot ever - 2 clicks; done.
With the balmy weather we had up through yesterday, I've been eating lunch outside while I post my photo. Today, I'm in my car. Safely balancing my laptop and lunch recalled a childhood image-memory of eating in one of our vehicles from a handy fold-down tray with a drink divot. I thought it was so cool!  Either that or, in the days before "happy meals", the glorified and rare occasion of eating fries from a drive-thru was the cool thing that imprinted the whole tray snapshot in my brain.
Happy meals - now there's a distinctly American phrase. For the vast majority of the rest of world, every meal is a happy meal.
Wow, major leapfrog in the grey cells. Good thing it's time to go back to work - no telling where we'd end up with another 5 minutes.
Posted by Cyndy at 13:22 1 comment: 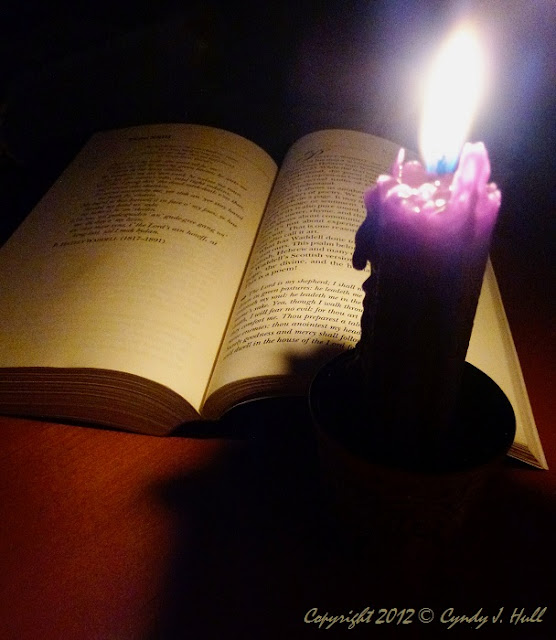 This hasn't been my lot for a while, but today I wanted to avoid the world and stay hidden and cozy in my dim, downy nest. But, thanks to a healthy sense of obligation to outside commitments, I swung my legs out into the morning darkness and proceeded to my morning ritual of coffee, oatmeal (dosed with chia seeds, thanks to a sharing brother), and a poetry devotional (courtesy of a caring sister!). Ritual is scoffed at by some as a crutch, but embraced by others as life-support. This morning's reading of P. Hately Waddell's Scottish translation of the 23rd Psalm reminded me how words have power to bring life and that light always shines on in the darkness. And so, my whole day was different.
Posted by Cyndy at 13:51 1 comment: 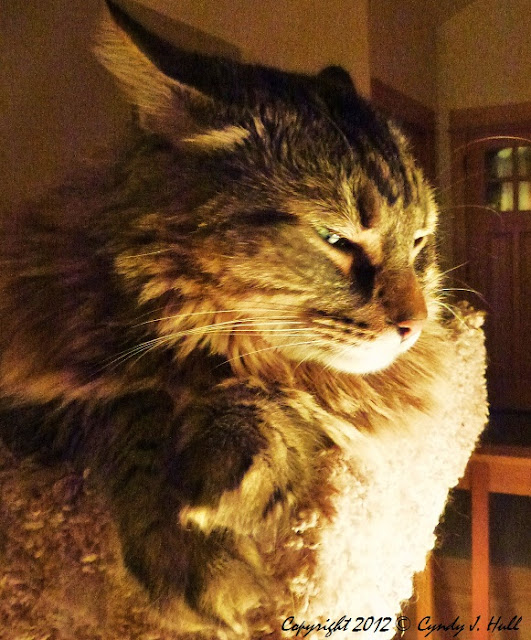 I don't know why The Morning People insist on their extra hour of morning light. My husband said it is for the children - so they can safely walk to school - and would I please stop whining.
(Okay, I added the whining bit for effect. Please say you spontaneously snorted so I don't have to repent of embellishment at his expense. To his credit, my husband wouldn't seriously say such a thing, & definitely wouldn't this week since he's still on happy-enhancing muscle relaxants following his recent surgery.)
Safety notwithstanding, given that my daylight preference is to have more of it when I can be out in it - say, after work - I still think early Daylight Savings Time is a conspiratorial power grab by The Morning People. The more I think about this, the more worrisome this becomes: The Morning People are probably often also known as "they", as in "they say seeing is believing" or "they are taking over the (insert pet faction here)". Egad! The ubiquitous "they"! Of course, there is always the possibility of relocating to Arizona where common folk still resist when The Morning People come around handing out their version of kool-aid.
Hmmmm.... thinking about = proportionately increased worry, hence, I better stop thinking about it.
Ta ta for now!

(Caveat: I am absolutely joking, do not truly hold any positions put forth above, and actually love quite a few Morning People - except for the times they ring me up too early, with excessive chipperness in their voices. Please click the "kool-aid" link to enjoy the full scope of my senseless drivel. And then you can read a potentially useful version here.)
Posted by Cyndy at 13:38 No comments: 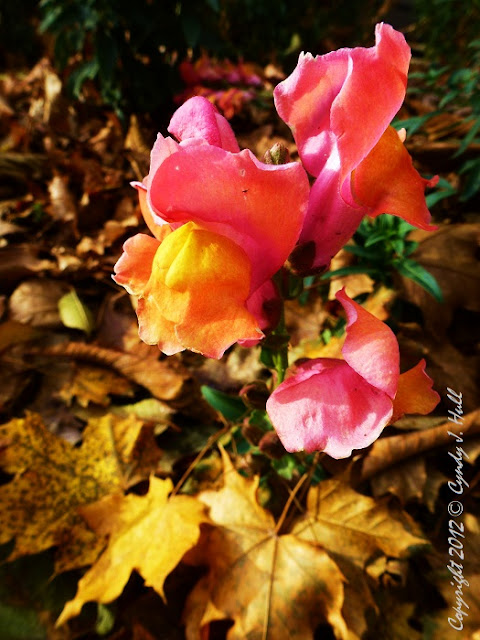 As a "lazy" gardener, I truly appreciate snapdragons. (And not just because their blossoms double as talking puppets of a sort.) During the rain-less summer, family visiting at out little cottage in Hamilton, Montana, remarked how amazingly the snapdragons bloomed on despite minimal water application. And now, those stubborn little annuals persist even through the seasonal onslaught of falling leaves and at least one dusting of snow. What's not to love?
Posted by Cyndy at 13:20 No comments: 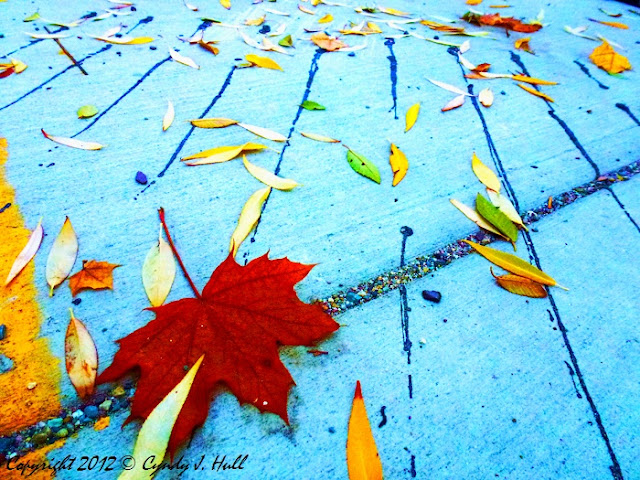 Our Missoula, Montana, neighborhood had sidewalks put in last summer, way before this year's hotly debated sidewalk funding discussions. Surprisingly, I never saw mention of the sensible, gradual accrual funding method used in our neighborhood, or the point that those of us who've already paid for our sidewalks prob'ly shouldn't be tapped to pay for concrete in other neighborhoods.(And don't even get me started about how the surface of our sidewalks began disintegrating within a month.) The final formula took this into account, but still is tough on homeowners' budgets.
Posted by Cyndy at 11:42 No comments:

Cyndy
To open your eyes in Montana is to hear creation sing praise to its Creator. To visit Montana is to plant the seed of coming back. Consider these way-I-see-it bits of Montana as my homeopathic prescription for deprived souls counting the days 'til return. (Note: Regrouping back to a daily pic is ongoing since Blogger completely abandoned their app, so please enjoy randomly for now!)