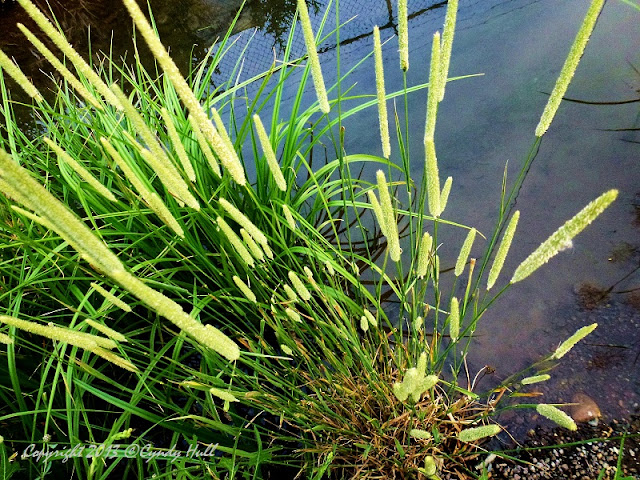 “We have walked among the tall grasses,
through wildflowers we were lead,
They stood like noble kings and queens,
with crowns upon their heads…”

From Amoroso, by Aubrey Keith Wilhoite

The entire poem, accesible via the text link in the title, is beautifully tender.
If anyone finds information on this poem's author, please let me know in a comment on this post. The only potentially relevant item I found was in a geneology listing, which referenced "AUBREY KEITH WILHOITE was born on April 28, 1956. "
Posted by Cyndy at 06:30 No comments: 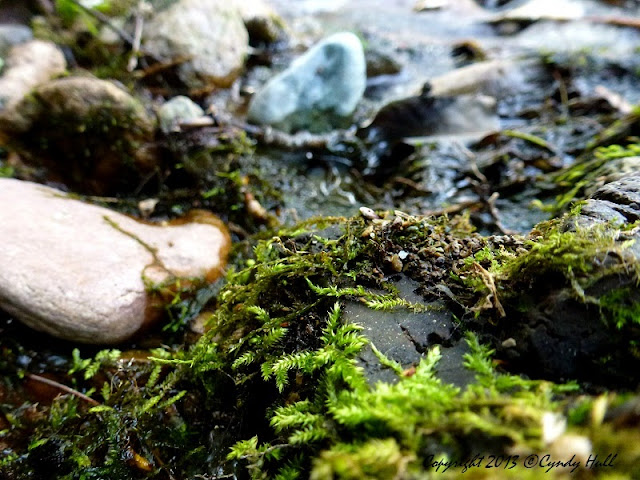 Miniature boulders and mossy terrain....just imagine miniature people clambering over the rocks,  holding hands to steady across the canyon brooks. (They're resting now, in a shaded overhang, which is why you can't see them.) 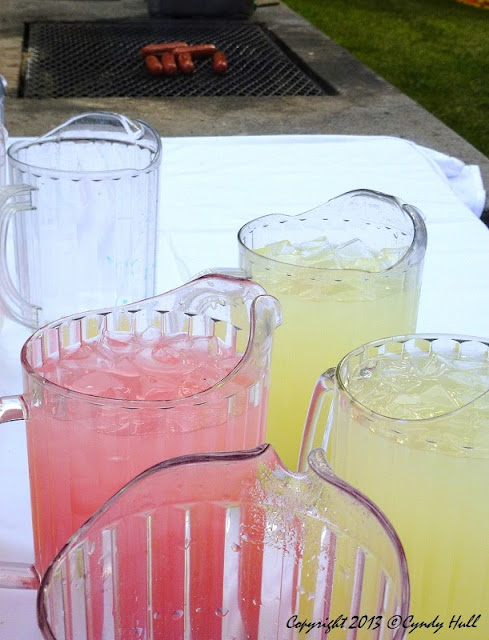 Lemonade and hot dogs on the grill - it doesn’t get more quintessential American summertime than that.

(Tofu dogs aren’t quite the same, but we understand. At least one knows what one is getting with a tofu dog. But that takes away some of the mystery and adventure, though, doesn't it? Or perhaps I need to get out more...)
Posted by Cyndy at 06:30 No comments: 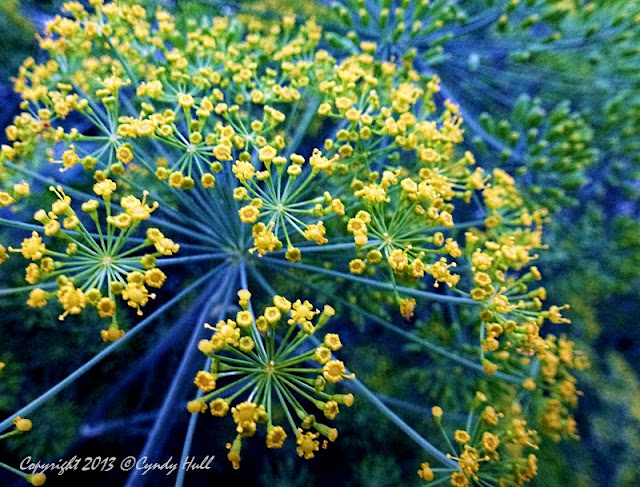 If you’ve ever been privileged to eat the best homemade pickles ever, you appreciate the small wonder of cucumbers being ready for harvest at the same time as the dill plant.

And if you just thought, "What is she talking about?", then you may want to consider improving your circle of acquaintance to include a better class of home-cooking nurturer, preferably of the Ukrainian variety.
Posted by Cyndy at 06:30 No comments: 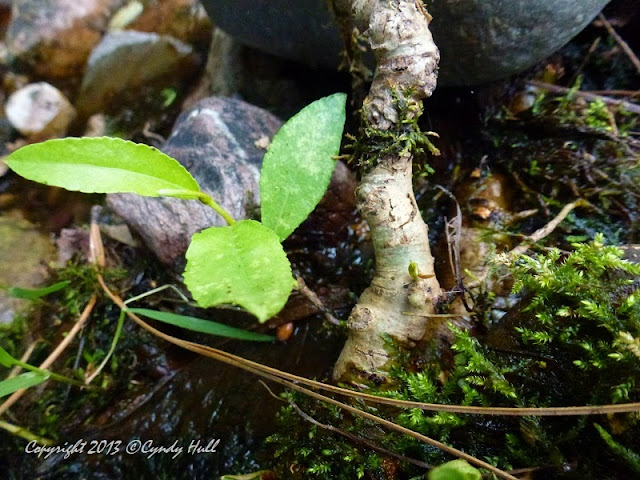 “From nobody to upstart.
From upstart to contender.
From contender to winner.
From winner to champion.
From champion to Dynasty.” -
- Riley, Pat

As in the NBA, so it is in the forest.

Just the phrasing is more at, "Mighty oaks from little acorns grow." 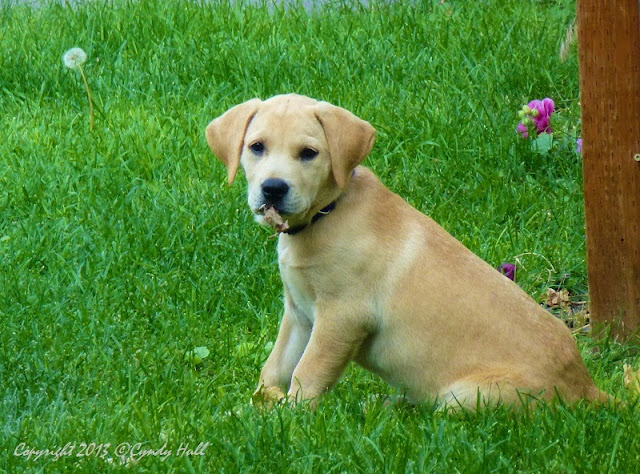 There’s a reason it’s called “puppy love”.
Puppies are kinda like babies in that when you meet a sweet one, you want one of your own - at least for that moment when you’re enamoured of the sweet eyes, those velvety ears, that playful pause in tossing the random leaf. But beyond the smitten moment, commitment is required to create a life-long delightful friendship. Raising a dog ain’t just a walk in the bark park.
Likewise, puppy love needs a little more consideration before being acted on. I’ve heard it said that we spend more time researching and educating ourselves for the purchase of a car than we do for the choice of who we’ll marry. Well, here’s a little help via books that were answers to my prayers when I needed re-education on true love: “Finding the Love of Your Life” by Neil Clark Warren; “Mars and Venus On A Date” by John Gray; and “How to Know If Someone’s Worth Pursuing In Two Dates Or Less” by Neil Clark Warren.
They’re all broken into digestible doses and read easily and engagingly, so if you or someone you know is ready to move beyond puppy love, you'll enjoy them as an investment towards a healthier future.
Posted by Cyndy at 13:20 No comments: 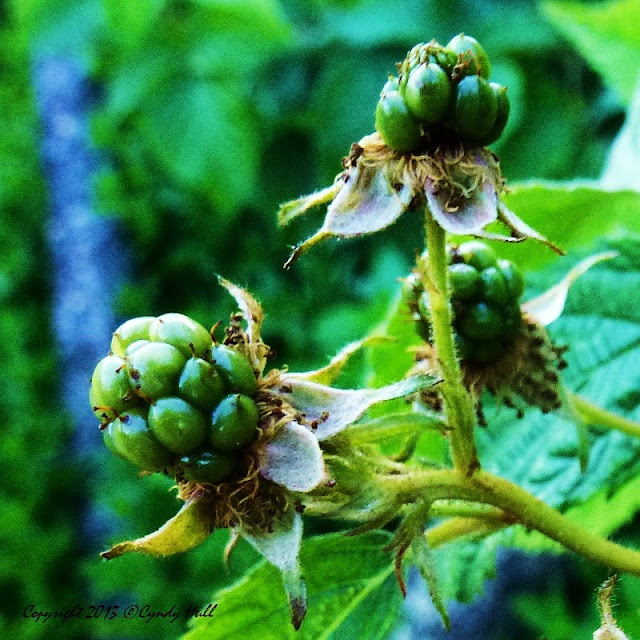 One of my all-time favourite book series is Lucy Maud Montgomery’s “Anne of Green Gables”.
Here’s a delicious raspberry-flavoured excerpt.
“Marilla is a very generous woman. She said we could have fruit cake and cherry preserves for tea. But it isn’t good manners to tell your company what you are going to give them to eat, so I won’t tell you what she said we could have to drink. Only it begins with an R and a C and it’s bright red color. I love bright red drinks, don’t you? They taste twice as good as any other color.”….
“Now, please help yourself, Diana,” she said politely. “I don’t believe I’ll have any just now. I don’t feel as if I wanted any after all those apples.”
Diana poured herself out a tumblerful, looked at its bright-red hue admiringly, and then sipped it daintily.
“That’s awfully nice raspberry cordial, Anne,” she said. “I didn’t know raspberry cordial was so nice.”
“I’m real glad you like it. Take as much as you want. I’m going to run out and stir the fire up. There are so many responsibilities on a person’s mind when they’re keeping house, isn’t there?”
When Anne came back from the kitchen Diana was drinking her second glassful of cordial; and, being entreated thereto by Anne, she offered no particular objection to the drinking of a third. The tumblerfuls were generous ones and the raspberry cordial was certainly very nice.
“The nicest I ever drank,” said Diana. “It’s ever so much nicer than Mrs. Lynde’s, although she brags of hers so much. It doesn’t taste a bit like hers.” - "Anne of Green Gables", Chapter XVI

To make your very own batch of Aunt Marilla's Raspberry Cordial, check out this recipe - complete with luscious photos! - from The History Kitchen.
Posted by Cyndy at 06:30 2 comments: